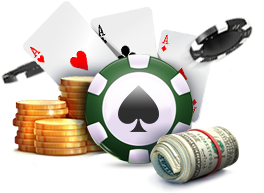 Poker has become the most popular card game on the internet with players from throughout the world joining games and tournaments at online poker sites (see UK Poker Sites). There are several different variations of poker that you can play at most of the online poker sites; Texas Hold’em, Omaha Hi-Lo, Omaha Hold’em, Seven Card Stud, and Five Card Draw. The most popular of the poker variations is Texas Hold’em which is played by a large majority of online players, though Omaha and the other online poker games have a growing following. In this section we give you some of the basics of poker, the rules and how to play some of the different variations.

Poker Hand Ranks Standard poker game poker hand ranks - familiarize yourself with these if you are not already.

Poker Terms Glossary - This is a large and detailed poker glossary/dictionary to help you with any foreign terms. 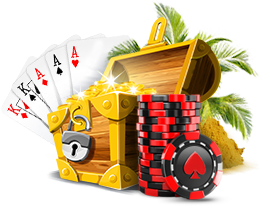 To start off a game of caribbean stud poker, each player antes a chip into the middle. After all players that are in put an ante in, the dealer deals 5 cards face down to each player. The dealer also deals himself/herself in 5 cards during this process. The dealer’s hand in caribbean stud is 4 face down and one face up , which is pushed into the middle of gameplay towards the players. At this point, players may privately look at their own hole cards.

Players can decide to bet or fold. If they decide to bet, they must place double their bet in the box, and if they fold they lose their original ante. The dealer then flips his cards and if it is a qualifiying hand (ace/king or higher), then each player sees if they beat the qualifying hand. If they did, they win their bet. You are only allowed to play one hand at a time at Caribbean stud poker.

Follow the queen is very interesting poker game, which is not as common as it used to be. Follow the Queen poker starts off by dealing everyone their cards - the first card dealt exposed after any queen exposed, is automatically counted as a wild card. If the last card comes down exposed is in fact a queen itself, it makes all the queens in the game “wildcards”. Follow the Queen poker uses the same rules and hand values as Seven Card Stud. Dealer’s choice games are often the source of this unique variant of poker.

Chicago, either the High or Low versions, are variants of stud poker. They can only be used in normal stud or eights or better stud - not a Hi/Lo stud game. High Chicago has various rules with one of them being that the player with the highest spade at the end of the round gets half the pot automatically. Alternatively, the opposite of this happens in Low Chicago, where the lowest ace automatically gets half the pot. Ace is counted as a low card. The spade in both instances must be face down, which is referred to as “in the hole” in High and Low Chicago. If the player has the winning card in the hole as well as an entire winning hand compared to his opponents, he/she gets the whole pot. That’s known as a Chicago scoop.

Billabong is a very unique poker variant, and it can be called a version of the game “Manila”. The game beings with the dealer dealing two cards to each player face down, and one card to each player face up. The lowest card face up starts the first betting round with a typical bring it in bet. In some variations of Billabong, the high card starts the bring it in bet instead. The dealer then deals 2 community cards for the flop as opposed to 3 for texas holdem. Whichever player has the strongest showing hand including community cards at that point has to start this betting round. After that, the third community card is dropped with another round of betting on top of that. The river then comes (fourth community card) and a final round of betting takes place. The players must make the best hand using all 7 available cards, using standard 5 card poker hand values.

2 to 7 stud is a sever card stud variation with very similar rules to 7 card Stud. The dealer deals to each player, starting with 3 just like in 7 card stud, with the same amount of rounds. After each new card is dealt, there is a betting round. Aces in 2 to 7 stud are only counted as a high card. All the other poker values are the same but low hand wins - 2 to 7 (2,3,4,5,7) is the best possible hand.

7’s Take All is a very similar game to seven card stud. The game is started with the dealer dealing everyone 2 cards down and one card up. All of the standard poker hand values apply, but in 7’s take all one hand can beat even a Royal Flush - a pair of 7’s. Trip sevens do not count, nor do quads, but a pair of 7’s is the highest possible hand in 7’s Take All Stud.