Playing poker has never been more popular than it is today, and more and more players are discovering the excitement, and profit opportunities of this great card game. Every professional poker player understands the importance of establishing a good bluffing strategy, and every poker player, no matter what their level of play, should strive to come up with a good bluffing strategy.

While bluffing is a powerful strategy, it is one that should be used sparingly. Beginning poker players love to bluff, and their bluffs are often easy to spot and easy to call. As players learn, their bluffing generally becomes less and less, and they learn when to use bluffing, and when to resist the urge to bluff. 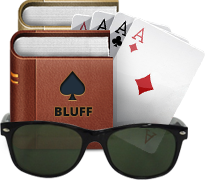 Knowing when to bluff is a vital part of playing poker, and there are some situations that simply call out for a bluff, including: