In the last two parts I set out a basic explanation of position and then addressed how to use it to your advantage in general, and against certain types of players. In this, my last of three articles on the subject, I’ll address tricky players and tight aggressive players, and then discuss other considerations about position – like where to sit when you know nothing about the style of play of the players you’ll be up against. 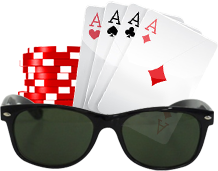 For the most part you want good tricky players on your right. You want to see what they do before you commit yourself to entering a pot. You don’t want to bet a borderline only to find that you are up against them – and potentially only them. You’d rather have the advantage of knowing either that they’re not in at all or at least how much they are in for before you decide to act.

For example, let’s say you have a pair of tens in middle position. The pot has been folded to you. The good tricky player follows you. He’s apt to raise as a bluff or raise for value – and you have a very hard time figuring out which is which. Should you raise and run the risk that he’ll try and blow you off of your hand by tripling the bet? You’d much prefer to know that either he’s out of the hand. Similarly, if he raises in front of you, you can fold your hand and avoid having to play against him. Alternately, if you’ve been very tight and want to push back you can raise him – and get him thinking for a change. But if he hasn’t yet acted he has the advantage of having position on you.

That being said, there is one advantage of sitting behind a tricky player like this. If he follows you then, most of the time, he must act through all of the other players. They serve as a disincentive for him to specifically target you. If you are generally a tight/aggressive player this is a good thing. There’s a good chance that he’ll resist the urge to just raise you, since he must also succeed in knocking out the other players in the game before the action comes to you. If some of them are loose or passive or clueless – as is frequently the case in most low limit games – they will serve as a disincentive for him to try and take shots at you – since they’re in the way. In other words, he has all of the other players whom he must successfully bluff if he wants to screw around with your head.

The tight aggressive player is less of a concern than any of the other players. While theoretically, you’d like him on your right as well, so you can avoid him when he enters one of the few hands he actually plays with his high quality hand, in reality, it’s fine if he sits after you. Since he is tight, he will be in few hands. Since you are fairly tight yourself, you’ll be in relatively few hands. True, you would prefer to know if he has one of those few good hands he plays for a raise, but since he and you are both tight, you will seldom be in a hand at the same time – making his position relatively to yours of little importance.

Other Considerations About Position

All of the above is helpful when you have a chance to study a game for at least a few hands – or one where you know many of the players. But fairly often I’ve found that I am thrust into a game quickly, where I know few if any of the competitors. I’m quickly asked which seat I’d like –and so I must decide based on first and fast impressions.

For those occasions, when you don’t have the time to size up the players, there are a few quick picks that I make. I’ll share them, and a few pieces of advice, with you here with a little explanation for each.

All other things being equal, I want the money on my right because I want first shot at it. True, players may be ready to buy in. True, the player with the money may be the tightest, loosest, best, or worst player in the game. I have no way of knowing at a glance. But I’ve found that sitting to his immediate left – or as close to that as possible—is the best seat at the table more times than not.

This is a gross stereotype, but if I have no other information I’ll go with what I have. While there may be nearly as many exceptions as there are examples that prove the case, I find that seniors and women tend to be tighter and more passive than younger male players. Similarly, neat players with even stacks tend to be very careful about their money, play few hands, and in general exert little pressure. Again, there are many exceptions, and you must not allow your stereotypical response go unreviewed based on individual actions. But absent any individual information, I’ve found these stereotypes to be useful.

You want to be able to change your seat as you evaluate the players and the game. You want the ability to move to the best seat if and when it becomes available.

You may not know this. But sometimes you do. I do this for two reasons – one illusionary the other real.

The illusionary reason is to create the impression that I care about luck and that I’m moving into a lucky seat. Some players care about luck, even though I don’t. If they think that there’s a tendency for the player in a seat to get lucky, by nature of the seat he’s in, I want to use that to my advantage – maybe he’ll play less hard against me. Similarly, if some of the players view a seat as unlucky, because someone just got busted in it, all the more reason for me not to take it and with it their impression that they can push me around because of the bad luck of the seat.

The real reason is because, at least marginally, I find that money flows clockwise around the table. If the guy who just left the seat just got it, it’s more likely than not that he got it form players at or near his right, as it rotated into his stack. This may be because those players, to his right, were especially bad or especially unlucky. If it’s because they were especially bad then I want to have them play badly right before I raise to isolate them. Admittedly, there’s no scientific proof that this works, but it seems to make sense to me.

I want the new player, who will take the other seat, to sit behind me, so I can size him up before I commit myself to a pot he’s in. Also, since he’ll be new to the table, he’s likely to have a full stack of chips and will be more easily manipulated by me – being new to the hand and, presumably, not having had experience playing with me. On the other hand, if I know that a particular player is a loose and passive player and he and I are both sitting down at nearly the same time, I’ll make a place for him on my left.

As you can see, position is very important at the poker table. Other players may not understand this – believing it to be either irrelevant or a matter of finding the lucky seat. Humour them in their ignorance – don’t educate them. So if possible, when you sit down or ask for a seat change, find some other excuse for moving. Say that you want a better view of the TV, or you want to avoid a draft, or something like that. Players in the know will understand what you’re doing. But if they are really good, they’ll keep it to themselves as well – not wanting to share what you both know to be true. Poker is a lot like real estate. Location is very important.