When to call in Poker

While a fierce aggressive image may be desirous in most public poker settings, calling, like any move at the poker table, has its place. Let’s face it; calling has gotten a bad name. In our hyped-up, televised, tight/aggressive poker world, we’ve been taught to fold or raise. We’re supposed to be the initiators, not the followers or action. We want that fierce image at the table. We even insult those who call too much. We denigrate them with the term “calling station”. Even so, there are many good reasons to call. Here is a hand’s worth of suggestions to ponder:

Calling to get action later in the hand.

This is the classic slow play. You hit trips on the flop? Don’t blow everyone out of the water right yet. Wait until they’re committed to the hand. If they initiate the betting don’t raise; just call. Try to convince them that you are much weaker than you really are so they’ll stay with you later in the hand when they improve or when they think the board hasn’t helped you.

Calling to encourage more players to stay in.

This is a variation on the above. But instead of aiming your play at one player – to seduce him into calling your strong action later, you are encouraging other players to stay in. You do this, often with a very strong drawing hand that would profit from many opponents who might also hit their hand. Here’s an example from limit Hold ‘em.

Imagine you call a bet with the king and queen of spades in early position. Five players see the flop. The flop has two spades, including the Ace, and a Queen. The early position bettor is pretty tight, so you’re pretty sure he has an Ace. Don’t re-raise and don’t fold. Encourage those behind you to draw to their hands. Maybe they hit a queen as well – but without the best kicker that you have. Maybe they’re on a flush draw too – though it isn’t the nut flush draw that you have. Maybe they’re even drawing for that inside straight (god love them if they are). In any event, if they hit you hit stronger. So you want to encourage them to stay in by just calling.

This is the simplest reason to call instead of raise. You want to see your hand develop as cheaply as possible because it isn’t yet made. There’s no shame in chasing with a good draw – in spite of the bad press this move seems to have. The only important consideration is whether you will make enough money to justify the cost of your draw when balanced by the chances that you’ll actually hit it. If you expect to make your draw one time in five and the pot is laid you better than five to one odds, for example, then you’d be a fool for not drawing to it. And when you do so, keep it cheap by just calling the bet.

Calling to keep a bluffer bluffing

Some players can’t resist the lure of perceived weakness from their opponents. If they initiate the betting, they will often continue to bet if they don’t face any counter aggression. Against these players you’re fooling to push them off their bluff. Let them keep it up until the river. This is a great way to increase up the pot and your potential winning outcome.

Here’s an example: I was playing at Foxwoods against one of these pushy players. Once he started his bet he never let up. I was in early position with AQ. Generally it is not a good idea to raise in early position with this hand. Sure enough, my opponent raised and everyone else folded. He could have anything, but probably had either two big cards or a medium pair. I called him. The flop was a Queen and two small cards. I had top pair top kicker. No need for me to bet. I knew he would. And so he did. I called, hoping to get a similar play out of him on the turn and river. I did. I called him all the way to the river, figuring there was little chance that he would surpass me if he didn’t start out ahead.

Sure enough, he turned over Ace ten suited after I called him on the river. “Why didn’t you raise with that hand – top pair top kicker?” he barked at me. “I thought you might have a set”, I humbly said and raked in the chips.

Calling to establish a friendly image. 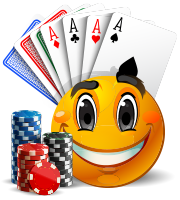 Poker is surely about the win and both money and prestige. But sometimes, in the interest of short-term gain we diminish our ability to make money. This is when it becomes important to look at the overall variance. Sometimes it is actually about becoming a welcoming presence at the poker table so that you 1) disarm your opponent and 2) you do not look too aggressive and overzealous. It means that you call instead of raise every time, yes even if you are certain you are in the lead.

Example: I play in such a game from time to time in a nearby community at a private ethnic club. Unlike the $20/40 stud games at Foxwoods, many of the guys are just there to gamble and don’t really have a good grasp of basic strategy.

In this private game, the best player is a guy who seldom raises. He bets his hand when he’s in the lead – and against a guy like me he’ll raise often enough, but against the other guys from the club he’ll just call them down if they initiate the betting. He always has a smile, doesn’t look the least bit intimidating, and nearly always wins – usually quite a bit of money. He does it by making these fish like him. They don’t mind losing money to him. They’ll chase him down because they aren’t made to feel inferior when they lose. It’s all for fun.

Raising makes people defensive. They have to make a decision. This is when you use your mind game strategy to lure your opponents into committing all or some of the Seven Deadly Sins of Poker. This is a good thing, often, in a casino. You want to put pressure on your opponents – to get them to make bad decisions they might not make if they weren’t feeling pressured. But in a home game, with guys who often haven’t a clue, it is better, sometimes, not to make your opponents have to think too hard. If they do, they’ll think about how you seem to know what you’re doing and they don’t. This can lead them to leave the game or, if you’re really unfortunate, to make sure you leave the game – not inviting you to come back.