We have all seen it that frustrated almost crazed look of the person chasing the win. Or the down and out table player who leans upon the table seeking solace in its padded side while they watch yet another win slip through their fingers. If you are playing live poker then it maybe that you are leaning on superstitions or bad juju or mojo. If you have spent any time online or in the casino then you know there are those things that just push a gambler to the point of their own demise. Here we point out seven deadly sins of poker. It is best to check, reflect and regain semblance if you are finding yourself leaning towards any of these sinful behaviours too much of the time. Here they are:

Winning at poker really depends on your ability to wait for those situations that you can turn into profitable situations. Wise players learn very quickly that not every hand can be won and folding is not a sign of weakness or of bad luck. Skilful players take their time, remain cool and watch for the clear indicators that they need to remain in the game or wait. These cannot be forced. Nor can they be anticipated to occur with a certain frequency. Events, players, and cards must be aligned correctly for you to make your profitable moves.

The lustful, impatient player is given to aggressive betting or loose calling because he is tired of waiting. Many younger online players seem to fall into this trap. They want it now. No need to keep waiting and no worries about the money being spent after all their naiveté says there is always tomorrow. This imperils his bankroll. Wait as long as it takes for a situation to arise that you deem to be profitable – not that you want to be profitable. After all, wisdom teaches, “Patience is a virtue!”

As a child one of the first things taught as you go off to school the first day is that you “always look both ways before crossing a street.” So it is as you toddle off to play online poker. You need to be fully aware of everything going on around you. There is no time to slip into a fantasy world of you collecting your huge pot of gold or imagining your arms in a sweeping motion scooping up all the chips to your stack. No, attention is necessary and failure to be alert is to be like a sloth slowly meandering through the world assuming that he is the only creature that matters.

You cannot be lazy and expect to win. Winning doesn’t just come to you. With that attitude find yourself a cosy slot machine that you can put on auto spin and keep on sipping that 15-year-old scotch. Which brings up another point; don’t consume alcohol whilst playing poker or any table games. It will lower your defences and move you from sloth-dom into a very passive player.

Profit at the poker table is the difference between your ability to identify good decision-making and a heightened awareness of your opponent’s mistakes. You cannot be a sloth or inattentive player and expect to win. Don’t be fooled by the laissez-faire attitudes of experienced players. A laid back attitude is a farce and it is how they disarm their opponents. Both of these require your attention. If you are not attentive to the cards at hand, the play of your opponents, and your image in their mind, you will not be able to play each hand correctly. Similarly, if you aren’t paying proper attention to your opponents, you will not be able to notice and thereby exploit their mistakes.

“Pay attention to your enemies, for they are the first to discover your mistakes.” Antisthenes

Poker is a thinking person’s game. If your brain can’t overrule your gut you’re toast.

There is a tendency for newer players to feel the pressure of other players to make a move. Remember you are in a defensive position at times and at others you are in an offensive position. Watch any QB in a high pressured American-football game and you will see that is when the defensive line is ready to sack the anxiety ridden Quarterback. However, watch an older wiser QB and they are rarely sacked. Why? Because they are not impulsive and they never let out their wrath on the other team or on their offensive line. They know that ego will never win the game and so it goes with poker. You are your own offense and defence. Never let your opposition know that you are rattled or emotional in any way.

The tight, smug jerk in the number three seat made another snide remark about how poorly you played your hand. Now you have a pair of sevens. He raises from late position. Normally you’d fold. But you’ll show him. “All in” you declare. He turns over Jacks. Good-bye stack.

“Great things are not done by impulse, but by many small things brought together.” Van Gogh

Let’s face facts; poker, gambling is about acquisition of wins. How many times have you witnessed yourself or others passively keep on playing after you scored big on a slot or the table. Your passive attitude is one of “well, it is their money after all.” But what you have forgotten is how much it took you to get to that point. Then there is the antithesis to that and you do not capitalize on the game or you sit back and wait for others to set the pace, following along behind their lead, you’ll be losing many opportunities for making money. And money not earned due to inaction is as bad as money lost due to incorrect action.

The passive player is, in the long run, one of the greediest players and end up becoming the losing player. Knowing when to become aggressive and force others to make mistakes or to up your ante is the name of the game. It is tempering passivity with unbridled greed and in the end to remain in the game as long as you can. It is also about avoiding the passive pose and get out when the getting’ is good. 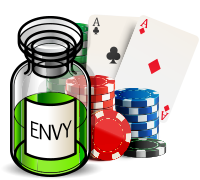 You cannot be timid in a game like poker. Far too often players will not sit out a hand for fear of missing that one hand that could make all the difference or being envious of other’s ability to fold, stand or just sit out a game or two. Those who can be bullied into folding, even when they hold strong cards, for fear that their opponent might win, are doomed to failure at the poker table. Much of this stems from the fear of loss and the envy of another’s better hand or skill. Because poker players are actually playing against each other it can create a dog eat dog world. Should poker players come to understand that because it is a game of skill and strategy that if poker players were to energize each other and actually improve the game overall then the need for envy or the act of being timid to act would bring about an improved game overall.

Poker is a game of probability, not certainty. Unless you are willing to take chances, be confident in your own hand and withstand the pressure of those who are so willing, you will not be able to win in the long run. Poker is a game of skill and yes, luck of the draw so if you spend your time worry about what move to make because you don’t have what the other guy has then you will never become a skilful player capable of withstanding the heat.

“True confidence is has no room for jealousy or envy…”

Unbridled aggression that flies in the face of reason will eventually cost you your stack.

It is also the reputation that the world of poker online has attained. Many view online poker sites and mega-players as blood sucking megalomaniacs whose whole purpose is to just devour little fish. While this may be true some of the time it is hardly all of the time. One way in which you can avoid being trapped in both your own gluttony for more, more, more is to temper your overall attitude whilst playing. If you begin to act as a heathen with barbaric intimidations to get more timid players into folding with hands stronger than yours initially, observant and patient players will eventually recognize this trait in you and wait until they have a certain advantage.

“A big man is always accused of gluttony; whereas a wizened or osseous man can eat like a refugee and every meal and nobody notices.” R. Davies

When it comes to playing poker, ignorance is not bliss. Nor does the notion of beginner’s luck carry you beyond a hand or two. Often time novices have a tendency to commit this sin and the sin of pride when they take ownership of a couple lucky wins and claims it as some medal of skilful achievement. You must know enough about the odds, the play of your opponents, how your hand is likely or unlikely to improve as the hand progresses. This all comes over time and over many losses. Rarely does a poker pro happen overnight.

Knowledge, in poker, is power. If you lack sufficient information then you do not have the basic tools for making the correct decisions. A wise player knows the difference between the role that skill and careful strategy had in a winning outcome and luck of the draw.

“Pride comes before the fall.”