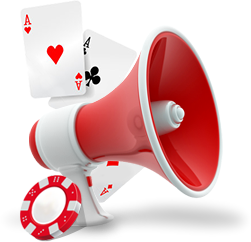 Poker tells come in many forms depending on wether you are playing live or online poker, but in this article we will focus mostly on live poker. Poker tells will generally show up as nervousness, a facial tick, how your opponent might look at their chips, if they stare at the flop, checking their whole cards, the timing in how long it takes for them to act or simply their conversation.

Poker Tells are more often than not done by inexperience players, however there are also many pros that will reverse that on players and purposely throw out false tells.

In this article we will examine both types and how you can use them to not only play better poker, but in the end win more money.

This is probably the most easily identifiable poker tell and is actually quite common not only in new players to the game, but also even to veterans in the game if they happen to be in a big hand. Many inexperienced players will often have shaky hands when dealing with their chips, so keep a close eye on their hands when they put chips into the pot. Generally this means they have a big hand and are so excited that it causes their hands to shake. This is rarely faked and is almost always a tell that they hit a huge hand.

This tell usually happens when a player can’t remember if they had two of the same suit or not and generally is a tell that they are on a flush draw. Make sure to check the flop and bet accordingly.

Also, another possibility is they have to check to see if they hit a straight. Again, look closely at the flop and bet accordingly. Chances are they may just be on a draw, but also remember many inexperienced players love draws so be careful when you see this tell.

Staring at a Flop

The tell usually means they missed the flop and are trying to figure out what cards they need to actually make a hand. Be careful though. If they continue to stare at the flop and then check their whole cards a time or two they may have just flopped at straight. This is typically a tell tale sign that they are making sure they actually flopped the straight.

This is also a common tell among inexperienced players. Watch their eyes to see if they glance down at their chips. This typically means they hit big and are already thinking about betting.

On the other hand, many top pros will use this to their advantage to throw out a false tell to an inexperienced opponent.

Always remember who you’re playing against, their history and how you’ve seen them play previous hands. A crafty pro may very well be setting you up for a bluff. 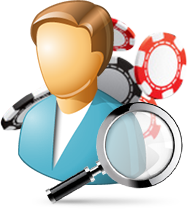 This is probably the most easily available and widely known tell.

Most amateurs and even some top pros will generally stick to basic betting strategies, so watch for these and use them to your advantage especially if you’re in position. This is also generally the rule at the beginning of tournaments. Most players like to start slow and ease their way in to the tournament to see how many people just fall out, so make sure to take advantage of this early on.

If you see “Joe” who’s been sitting next to you for two hours raise 2 times the big blind almost every hand when he’s in the big blind, this might very well be a good time to re-raise to get him off his hand.

Or if you see someone throw out a big raise that is way over what they normally raise be careful. 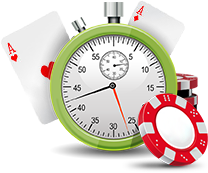 This poker tell is not only prevalent in live poker situations, but also in online play.

In online play there are quite a few less tells than there are in live poker. Most players have to focus on just a few tells since you can’t actually see the player.

Typically these are past notes on that particular player, betting patterns and timing.

Timing plays such a big role in online play because it’s one of the few things that the player actually gives off as a tell.

Because of this some experienced players have opted to always act after the exact same times runs off the clock, but unless you’re playing high stakes most average players will at least give you some information with the betting timing.

If a player acts quickly in live or online play it generally means their trying to show strength when they probably don’t quite have it. On the other hand if a player sits there forever and tries to give you some big acting role they are probably just trying to over do their act and generally have a huge hand.

There are many smaller, less obvious timing tells though. Some of which go back to betting patterns. Always remember the history and recent play of each player. So, if a player who generally acts quickly all of a sudden changes their timing, this probably means they’re contemplating a raise because they have a big hand. 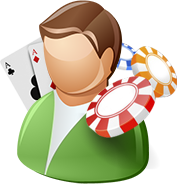 On the other hand players like Phil Hellmuth, Mike Matusow and Tony G. prefer to use their public image as assholes to their advantage. These types of players typically try to make you mad to get you off your game, feel uncomfortable or to call them in a specific situation.

Even good players have tells too, so if a player with the a mean reputation and attitude all of a sudden becomes a teddy bear, there’s probably something up.

A great example is at last year’s WSOP Main Event Final Table when eventual winner Jamie Gold got into a hand when it was heads up against who I believe was Paul Wasicka. Jamie had been talking smack all tournament long with his huge chip stack when all of a sudden he got into a huge hands heads up. Now all tournament long Jamie had been goating his opponents when he wanted them to call. But in this hand Jamie bet, Paul re-raised and then Jamie put Paul all-in. The difference in this hand was that Jamie didn’t say a peep. This should have been an easy call for Paul, but he obviously missed all those tells Jamie had been giving off during the tournament. What’s even more interesting is that Jamie had also been showing his hole cards after all those bluffs, but Paul still didn’t pick up on it.

While this is just a guide to some general tells, the most important of all these poker tells are betting patterns and timing. These two things should be the basis for your reading abilities and then look elsewhere like nervousness, facial ticks and such. You generally just won’t see that too much especially now that so many people are playing so often and learning so quick due to the internet.

Keep yourself focused, in good spirits and most of all pay attention to the other players around you and look for inconsistencies in their timing, behavior and betting patterns.

Remember, it’s human nature to treat people certain ways so you can get what you want from them. Watch for it from others at the tables and you might even try taking advantage of it yourself.