Poker is a game of skill with a chance element brought about by the random shuffle and distribution of cards. Variance in poker gaming describes the effect of that chance element in the short-term. It looks at the highs and lows of the game. It is not unusual to have swings. It takes into consideration what you plan on winning on average with the long term in mind, but taking into consideration what you are actually seeing in the short term.

While variance in poker is in many ways the enemy of the skilled poker player, having an understanding of this and ensuring that you get the chips in when you have the ‘best of it’ will bring you poker profits in the long-term.

Things that influence your outcome - variance over time: 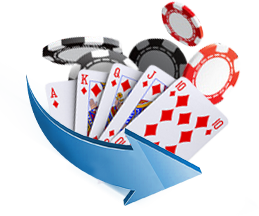 The nature of poker variance can be demonstrated with an example. You are playing in a poker tournament at one of the excellent poker sites listed here at PokerSoft. You are dealt Ace-King and after a raising war pre-flop manage to get all-in against an opponent holding Ace-Jack.

This is a great result; you have your chips in the middle as a solid 70% favourite. It also means that 3 out of every 10 times you play the hand you will be out of the tournament!

In this example you survive the hand and later in the same tournament get all-in again with a pair of queens against tens. Here you are 80% favourite. Later still you have Ace-king and again get in as a 70% favourite against a lower ace. Your poker skills have enabled you to get in with the best hand 3 times!

Here is where an understanding of variance can help your game. You are actually now less than even-money to be still in the poker tournament. This is how the numbers look:

So even though you have your chips in as a solid favourite each hand played, you are now out of the tournament more than 60% of the time.

Understanding this can help your online poker game in several ways. First of all, it can stop you feeling like you suffered a ‘bad-beat’ and subsequently going on tilt. Secondly, it could make you more inclined to play more pots where you are not risking all of your chips in one go. Thirdly, it should emphasize the need for solid bankroll management skills whichever game and level at which you play.

The skill element in any poker game needs time to manifest itself. Getting your chips in with the best hand will show a profit as long as your online poker bankroll is big enough to withstand the natural variance (or swings) in the game.

Variance in poker will always have an effect in your game. Understanding how this influences play and the fact that skill is the most important factor over time will help you to make your poker games more profitable.