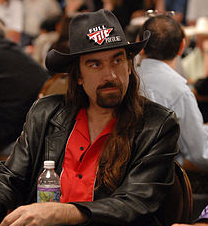 One might say that Chris Ferguson is a mathematical genius and that he has used his PhD., and his lifelong exposure to mathematics to good use when it comes to advancing his game of poker. Chris recalls that games were an important part of his childhood, not just learning how to play them but analysing them as well. His mother and father who hold advanced degrees in mathematics and statistics respectively were strong influences who challenged Chris to understand game theory. Ferguson didn’t start out to be a professional poker player; in fact, he spent most of his young adulthood studying computer science on the campus of the University of California Los Angeles. He was an online player when it was still text only and he played tournament poker in and around L. A. Still, it wasn’t until the mid-nineties that this holder of five World Series of Poker bracelets decided to focus his considerable talents on mastering the simple, yet elusive game of poker.

As a college student, Chris was one of the early participants in the Internet Relay Chat (IRC) network. A far cry from the user-friendly bells and whistles poker sites of today the IRC network was basically players gathering in chat rooms to text their games. From the time he first played until the time he left the network, Chris was consistently one of its best players.

A calculating student of the game, Chris wasn’t willing to jeopardize his money on a perhaps unsuccessful assault on the World Series of Poker. It wasn’t until he won his way in through a satellite tournament in 1996 that Chris made his first visit to a WSOP main event. After losing his bankroll by making a humbling, character building novice mistake in 1997, Chris regrouped to take two WSOP bracelets in 2000. He beat the venerable T. J. Cloutier in the Championship Event after first taking the 7 Card Stud Event. That year Chris Ferguson took home more than $1.6 million from the two wins. He has gone on to win another three bracelets in a variety of game formats. His professional poker earnings to date well exceed $5 million.

Chris is one of the best known and most popular of today’s poker stars. His long dark hair, which earned him the appellation "Jesus" and cultivated cowboy look, make him an easily recognized favourite of poker’s many fans. A friendly, approachable manner further burnishes his reputation among both his colleagues and those who watch and love the game. He also has a handy secondary talent with a deck of cards. Many a banana has found itself sliced and diced by a speeding card expertly thrown by Mr Ferguson.

These days Chris can often be found playing online at Full Tilt Poker. Chris doesn’t own a piece of Full Tilt Poker but in 2002 he and a team of software designers configured its original website. He continues to take a strong interest in its unique look and feel. Along with a number of other poker professionals Chris regularly interacts with the millions who visit the site on a daily basis. Chris is also active on the tournament circuit although not to the extent of previous years.

Poker is far from Chris’s only interest. He is widely known as an accomplished amateur ballroom and swing dancer. Chris also maintains his interest in computer science particularly artificial intelligence.

There are many excellent players at today’s increasingly crowded poker tables. Very few, however, possess both an immediately recognizable persona and a high degree of skill. Chris Ferguson combines these attributes with an easy going, fan friendly demeanour that will keep him a star for many years to come.