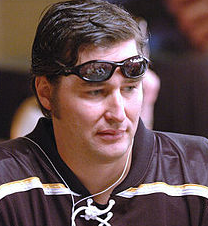 Phil Hellmuth is one of the most recognizable poker players. He is an outstanding player and holds fourteen World Series of Poker bracelets. Hellmuth is currently ranked eighth among the all time money earners in poker. He has won $19,310,196 to date. Hellmuth is a tower of a man standing at 6’7” and when Hellmuth is in the room you know it. Phil Hellmuth is just as well known for his behaviour and sharp tongue as he is for his poker-playing ability. However, it is partly his behaviour at the tournaments that makes World Series of Poker Events so fun and exciting to watch. With the recent explosion in the popularity of poker, Phil Hellmuth has become a very visible player, cashing in with books and endorsement deals in addition to his substantial poker winnings.

Phil Hellmuth was born on July 16, 1964 in Madison, Wisconsin. He attended the University of Wisconsin-Madison, although he did not complete his degree. He took classes for three years before dropping out to play poker full time. That turned out to be a good move on his part. In 1989, at the age of 24, he beat Johnny Chan to become the youngest World Champion of Poker. Phil Hellmuth has been winning ever since. He has accumulated 9 World Series of Poker bracelets, all in Texas Hold'em, winning in 1989, 1992, four times in 1993, 1997, 2001, and twice in 2003. He was the champion of Late Night Poker in its third season, and has won about $3.5 million just at World Series of Poker games, and right now his live tournament winnings are in excess of $6 million.

When Phil Hellmuth isn’t playing poker he is enjoying his beautiful home with wife and two sons. Anyone who has ever had the pleasure of meeting Phil knows what a gentle giant of a man he is when away from the ferocity of the poker tournaments. Hellmuth will be enjoying some time as an addition to the “Poker Night in America” under the Direction of Ben Erwin. This series pits local poker players against poker celebrity greats such as Phil. One thing is for sure; Phil Hellmuth is nowhere near ready to fall out of the poker spotlight.

Phil Hellmuth is doing what many sport celebrities with any lick of sense are doing and that is to franchise his name and move into the realm of commercial success. His line of Poker Brat Clothing line (named after his poker persona) is taking off and capturing a new generation of fans and followers. Additionally he is a current spokesperson for Hardee’s, Carl Brand. No longer are such promotional opportunities left only to Nascar or the NFL. Instead, players like Hellmuth are helping to identify the value and notoriety of being a World Series of Poker Champion.

Many of Phil Hellmuth’s critics deride his lack of grace both in victory and in defeat. There is no question; Phil Hellmuth is on the record as saying some pretty outrageous things. For example, at one tournament, he said, “If luck weren’t involved, I guess I’d win every hand”. He has also said that he’s “revolutionized the way to play Texas Hold-em”. In 2005, he claimed that he could “dodge bullets” during a game. His lack of grace in defeat has led many people to refer to him as a poker brat or “hell-mouth”. Indeed, while his critics find him abusive and arrogant, there is no doubt that the television producers and executives absolutely love him. Many people tune in just to see what outrageous things may come out of Phil Hellmuth’s mouth, and there is little doubt that his antics have helped raise the profile of poker in recent years, making millionaires out of many people.

It is this sort of attitude that may have helped make poker such a huge commercial success. Plenty of people, especially Phil Hellmuth himself, have cashed in on his image. Indeed, Phil Hellmuth’s real moneymaker may not be his poker skills, but his business skills. Phil Hellmuth has parlayed his poker career into a career as an author, whose credits include the books Poker Brat, Play Poker like the Pros, Bad Beats and Lucky Draws, and The Greatest Poker Hands Ever Played, as well as numerous articles for Card Player Magazine. His career in media doesn’t end there. He replaced Phil Gordon recently as one of the commentator’s for Celebrity Poker Showdown, which airs on Bravo. Phil Hellmuth also has other business pursuits, including a partnership with the online poker site Ultimate Bet and a deal with Oakley to design a series of poker-inspired sunglasses.

Aside from his antics and business deals, Phil Hellmuth has been a part of many charity events over the years, helping to raise money for a wide variety of charitable cause. For example, Hellmuth has played in tournaments benefiting diabetes research as well as other tournaments benefiting children and schools. Phil Hellmuth’s wife, Kathy, is a doctor at Stanford University. The couple has two sons, Philip III and Nicholas. The family lives in Palo Alto, California. When the day is done, Phil puts family first.