Phil Ivey is without a doubt one of the greatest poker players alive today. He may be one of the best poker players of all time. Ivey currently holds ten World Series of Poker Bracelets. He is a force to be reckoned with. Born in Riverside California in February of 1976. According to Hendon Mob, Ivey is currently ranked fourth in the world with a lifetime winnings of $23,856,034.

Phil Ivey has found himself in a little controversy in the past couple of years but that has not dampened his flair for positive PR spins or low-key style that has impressed the likes of Chrysler Corporation. Ivey is a mega-star and has a sex appeal that will keep him in a positive light for some time. Recently Chrysler asked Phil to promote out their 2015 Chrysler 300. The Ivey brand is one with a cool, smooth style. While other bad boys of poker capture a great deal of media attention, Phil Ivey offers the antithesis to the bad boy and his glamorous Champagne charm and “best of class” flair, could possible outlast the rapid burnout of other “bad boys of poker.” 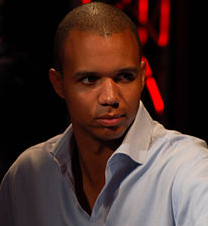 One of the first things that people notice about Phil Ivey when they watch him playing poker is that he is young. Although you see a lot of younger poker players doing the professional poker circuit these days, especially with all of the televised tournaments, Phil Ivey stands out. His calm demeanour and obvious concentration skills show him to be a seasoned pro, and once you watch him play, it’s hard to take your eyes off of him.

Phil Ivey’s love affair with the game of poker began at the age of eight, when his grandfather taught him the game. Instead of seeing poker as just another fun game to play, Phil saw it as a way of life, and when he was still a teenager he started playing with more experienced adults – and beating them. This further fuelled his passion for poker, and he ended up acquiring a fake ID, hitting the Atlantic City casinos, and playing in all of the poker games that he could.

Phil was not immediately successful when he started playing with the serious poker players, but what he learned during those early years of casino playing was invaluable. Every time he lost he learned something, and this helped him to keep getting better at the game. Eventually he became very proficient at games like Texas Hold’em, Omaha, and Stud. At the age of 20, he moved to Atlantic City to be closer to the action, where he currently lives. Within four years of moving to New Jersey Ivey entered his first World Series of Poker tournament. Phil’s experience and sharpened skills from all of his years of playing serious poker paid off, and he ended up winning a World Series of Poker bracelet playing Pot-Limit Omaha. To win that bracelet, Ivey had to beat some impressive poker professionals, and his standings as a serious poker contender became established. Rather than passing his win off as beginner’s luck, smart professional players realized that Phil Ivey was someone to take seriously.

Phil Ivey has a straightforward philosophy about playing poker. He believes that in order to get good and stay good, you have to play all of the time, in all types of games. Even though Ivey is now considered one of the best poker players in the world, he doesn’t just limit his playing to large tournaments. Ivey is involved in running the poker website “FullTilt Poker” with some other professional poker players, and he often plays online games at this site. He also plays in high stakes games at Bellagio in Las Vegas, Nevada, where he and his wife Luciaetta now live. Phil still puts in a lot of hours playing poker, whether live or online, and his love of the game is still strong. Poker is a full time job to Phil, but fortunately it is a job that he loves, and never plans to give up.

Although, Phil Ivey could be considered a relative newcomer to the game of poker, his current standing, entrepreneurial prowess and panther like focus is enough to elevate him to a man of ages. In just the few short years he managed to transform into a stellar poker player and one that appears to have been playing professionally in the World Series of Poker tour for decades. He has managed to make a long-lasting impression. Like many high-level poker players, Phil Ivey is also an aspiring businessman with many tie-in deals and endorsement deals, and he is active on the charity circuit.

Phil Ivey is currently one of the youngest players in the World Series of Poker Tournament. He honed his skills at the poker table by playing with co-workers when he was working at a telemarketing firm in New Brunswick, New Jersey. He quickly outgrew that and started making a name for himself on the professional poker circuit. More recently, many people have started referring to Phil Ivey as the Tiger Woods of Poker, not just for his physical resemblance to the golf star, which is considerable, but also for the degree of success that he has garnered at such a young age.

In addition to the ten tournament bracelets won by Ivey, he has become a major player at the World Series of Poker Main Event, making it into the top 24 three times between 2002 and 2005. Ivey has also had a fair amount of success in the World Poker Tour and in other professional level tournaments. With respect to the World Poker Tour, Phil Ivey has made it to the final table on several occasions over the years, although he has yet to win a World Poker Tour event. November of 2005 was a particularly profitable month for Phil Ivey. He won a $1 million first prize at the Monte Carlo Millions tournament. Just a few days later, he won $600,000 on FullTilt.com’s invitational poker tournament, beating out such heavyweights as Phil Hellmuth, Chris Ferguson, and Dave Ulliott.

A lot of other poker players have a hard time reading Phil at the game table. His style is quiet and focused, and there are times when you can watch him play an entire game without hearing him say a word. You also may barely see him change his expression. With this style of playing, Phil has frustrated many a player who has had the privilege of sitting in on a game with him. His quiet style is apparent in his dealings with fans and the media also. Phil is a bit shy, but friendly, and although he has every right to, you’ll never see him bragging about his many accomplishments.