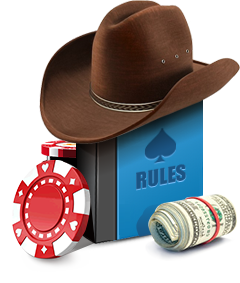 Texas Hold’em is by far the best known and most popular form of poker played throughout the world largely due to the TV exposure it’s received over the last five or six years on popular shows like The World Poker Tour (Travel Channel) and the World Series of Poker (ESPN).

Texas Hold’em is played with a 52 card deck and anywhere from 2-11 players at a table.

If two or more players tie with the best hand, the pot will be split between the tying players. If there is an odd chip number, the player sitting left of the dealer (button) will get the odd chip.

Betting moves clockwise around the table starting with the players sitting just left of the dealer (button) which is known as the small and big blind. Since the small blind and big blind are automatically already invested in the pot the first player to act is the player seated immediately to the left of the big blind. This player is typically referred to as “under the gun”.

Betting rules will vary depending on if you are playing no limit, pot limit or simply limit Texas Hold’em.

Each player is dealt two “hole cards” that only they can see. The first round of betting starts now with the player who is seated immediately left of the big blind. Each player now has the choice to call the bet, raise the bet or simply fold. Again, raising amounts depend on what form of Texas Hold’em you are playing.

After all the pre-flop betting is completed the three community cards are turned face up by the dealer. These three cards are called “community cards” and can be used by anyone still in the hand to make their best five card hand.

A second round of betting now occurs.

The turn in the fourth community card dealt face up and can also be used by anyone still in the hand.

A third round of betting now occurs.

This is the fifth and final community card dealt face up and again can be used by anyone still in the hand.

A fourth and final round of betting occurs. 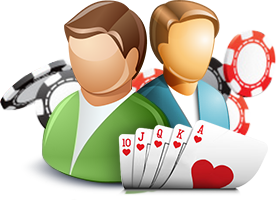 If there is two or more players still left in the hand the current players reveal their cards and the highest five card hand wins. If two or more of the players have identical hands the pot is then split.

This technique is very important as poker is not only a game of math and reading people, but it gives a player the ability to reveal or not reveal what they had to their competitors. Thus, using psychology to receive an upper hand on their fellow competitors in future play.

See our Poker Hand Ranking page for a full guide to the Rank of Poker Hands.

What is Texas Hold'em poker?

Texas Hold’em is the best known and most played poker variant around the world, both online and offline.

Texas Hold’em is a game of chance and skill where players have to combine their cards (the hole cards) with community cards that are shared with the whole table to form the highest-ranking five-card rank.

Yes, Texas Hold’em is massively popular online and virtually every poker site offers this variant of poker to their players.

You can play Texas Hold’em poker almost everywhere, however we’ve listed the very best poker sites you should check out and sign up to claim a welcome bonus and start playing Texas Hold’em.

The amount of money you can win at Texas Hold’em depends on the minimum and maximum betting limits of the table you’re playing at, and how much the players contribute to the pot during the game.

Texas Hold’em is a fast-paced and thrilling poker game that is enjoyed by millions of players around the world, including the UK. It’s arguably the most popular card game in history and the most widely available online too.

Yes, you can play Texas Hold’em on any internet-connected mobile device, including smartphones and tablets, by signing in to your poker account on a web browser or downloading the poker software or app to your device.