In my last part, Position Part I, I covered general and basic information about what position is at the poker table and how to properly consider it when you are playing. I also explained one example of how to use position against a certain type of player – a wildman. 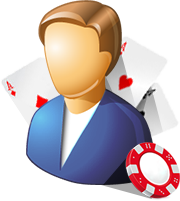 Against players like this, I really don’t care where I am seated relative to them. They are generally short stacked – being new to the game – and I find it very difficult to put them on hands since their action often is not necessarily indicative of the strength of their hand. And since I can’t put them on a hand and can’t predict their play, I neither want to try to manipulate them with my betting nor do I worry about them acting after me.

The clueless player functions more as a wildcard. I play my solid game against them – assuming that they are the only ones in the hand other than me. And I don’t try to get tricky. I don’t go for check raises – so I don’t worry about being in front of them. And I’m not necessarily looking to isolate them – since I’m more concerned with the action of other players than I am interested in their action.

If they are after me, I will tend to bet hands with slightly lower values than I would normally play – and I would tend to play them more aggressively. The reason is that I assume they do not properly value my bets and will probably tend to play against me with at least slightly inferior hands – since they are unlikely to have a good handle on which hands are really better than other hands.

I they are in front of me, I’ll tend to call with hands of lower value than I would normally play – assuming that they may be in the game with any hand. I can’t do this with too little caution, since invariably there will be others in the hand. 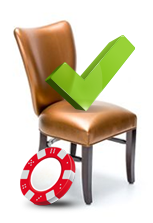 For different reasons, I don’t care very much about where I am sitting relative to the loose passive player. This player exerts little pressure on me if he is seated after me – since he rarely raises. Similarly, since he tends to call my bets more than most, I can’t really manipulate him with my bets and raises. If he acts before I do, it’s generally with a call, so I don’t get any good information about the true value of his hand by sitting after him. And since he calls so much he tends to bring other players into the action of the hand – since his money’s presence in the pot tends to encourage others to take advantage of the improved pot odds.

If the loose passive player is sitting to my left, I will tend to bluff less and value bet more with medium strength hands. I know that he will be more than ready to call many of my bets – so I don’t waste money trying to knock him out.

I will also tend to call with lower value drawing hands than I might normally play, knowing that I will probably get him to call along as well – which will tend to encourage other players to play passively after him. If a player does raise after the loose passive player and I have each called, I have the advantage of knowing that the raise is les likely to be a bluff than if I alone was in the hand – since the bluffer would have to succeed in getting at least both of us to fold. Since the loose passive player is less likely to fold than I, I can safely assume that the raiser is less likely to be trying to bluff with his raise against both of us than if I was the only person in the hand.

This last consideration holds true equally well if the loose passive player is sitting to my immediate right or immediate left – since the impact of both of us calling is the same regardless of our order.

In Poker Positition Strategy Part 3 I’ll cover tricky players and tight aggressive players, and then discuss other considerations about position – like where to sit when you know nothing about the style of play of the players you’ll be up against.